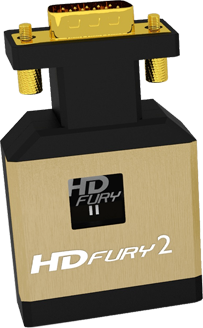 “I got mine today and it is FAB. Well done to everyone. Thumbs-up! The [CurtPalme.com Special Edition] unit is ALL metal with the gold colour front bezel. Weighs quite a bit actually. I have only had my XBOX 360 plugged into it with HD DVD Drive add-on (yes I was one of the silly sods that bought one) and the picture is far better than the HDFury1. Colour is spot on and not washed out. I no longer need the audio cable from the XBOX as I have a small 3.5mm jack to jack cable from my HDFury2 to back of TV. ” - Weehappypixie

“I just hooked up the Special Edition HDfury2 to my Mitsubishi 55809 RPTV and it works like a champ. I am now watching ‘Luther the Geek’ on a Phillips DVD player that upscales to 1080i. HDFury2 appears to have fixed all the issues, as promised, that plagued those trying to use HDFury1 with RPTVs (at least as far as the Pioneer’s are concerned). The picture is perfectly centered, there are no weird green lines, and no swings in brightness that I had read about in other posts regarding HDFury1. Awesome work. The colors look awesome, and sync locked automatically to the input. No screwing around was needed.“ – Lexx21

“I want to congratulate you for a great product. I have a Mitsubishi WS55905 rear projection Television and have tried several devices to connect my PS3 to my television to take advantage of upscaling. I just connected your HDFury2 and it works perfectly. The shifting has gone away and the colors, especially on dark scenes look great.“ – James_Aguirre

“WOW! I must confess, I didn’t really expect to see a difference in the picture quality. Boy was I wrong. The picture is awesome. Everything works exactly as it should. Dish VIP722 to Denon AVR-788 to HDFury2 to Mitsubishi WS55511 TV (component YPbPr input) No problems whatsoever! PS3 looks great. Overall, the best way I can describe the picture is “smooth”. The HDfury2 really shows off what my old set can do. There is no “grainy reds” and the picture seems to be brighter overall. It brought new life to my old Pink Floyd Pulse concert. So many colors and details in that video and the HDfury2 brings it all out. There is no grainy picture, yet the picture looks very sharp. I’m anal rententive about having perfect registration and the TV must be working well because edges are extremely sharp. I didn’t think having the all-metal CurtPalme.com special edition casing would make any difference. But it just adds a touch of class. I was surprised at how heavy it was. But when you pay a premium for something it should be built this way. It feels solid and looks great. Finally, I want to thank the whole gang on a great job. The HDfury2 is a great device. For me there are no flaws. The shipping from Taiwan to, essentially, Washington DC was super fast. On Friday when I received my shipping notice I never expected to be installing it on the following Monday. And everyone on the forums has done a great job keeping my informed about what to expect and when. Kudos to all!!! It was well worth the wait and the money.” – Toejo

“… And just to let you guys know that are running things (Kal, HKmod, etc….) I think what you are doing is outstanding! The way you are backing up your product makes me trust you even more. You have a long time customer here and I just wanted to say ‘Thank you for your effort’. It is not going unnoticed.” – UGC

“My opinion is that the Fury2 has a sharper image than the Moome EXT-FULLHD. Don’t know why, but I know after an evening of watching the Fury2, never once did I wish for a sharper picture. The increased sharpness of the Fury2 is most evident looking at the text on my HTPC’s windows desktop or watching distance scenes with Blu-ray or HD-DVD.” - Citation4444

“Okay then! This thing does everything that I’ve heard! It really works!!! This is money well spent and will extend the life of the CRT based RPTV that has served me so well for so many years. Sure I don’t have the fancy 1080p that so many other displays boast, but I also have no rainbow or screen-door effect. The HDfury2 maximizes the the functionality of my non-HDMI television, and gives me more time to evaluate the new technological improvements that are coming to market (LaserVue, new LCD display tech). Well done HKMod, Kal and everyone else working on development for this product! The HDfury2 continues to ROCK and has unlocked the full potential of my home theater!” - SpenceJT

“I’m definitely impressed with the module, as it has given my RPTV new life.” – jdbt3027

“The HDfury2 works beautifully. It saved us quite a hefty investment in a new large monitor.” – Mats

“I am very impressed with the quality of this device. Despite the issues with the earlier revisions, this last version 3 is ‘rock solid’. I am using an older Mits RPTV (55809) with component video and the hdfury2 has given it a ‘brand new life’. I’m using a DirecTV receiver through a Harman-Kardon 347 via HDMI switching. Previously, I was using component video and the difference is noticeable. I can’t wait to being acquiring other components to plug in.” – Gregg L.

“Video excellent with PS3 and Pioneer DV-48AV elite to a Mitsubishi RPTV. I would advise getting the HDfury2 to anyone especially because of its versatility”. - raildoc500

“HDfury2 arrived today! WOW thanks guys that was quick! Works on my ancient Mitsubishi RPTV, colors are much better and image is more centered.” – micl9

“I am blown away at the speed of your [tech support] response! I must say that yours has been not only the fastest, but the most relevant tech support reply I have ever received. Many thanks. I am also glad that “someone’s reading the content I’ve written” because I must admit that as I drafted my original email to you, I was fairy certain NO ONE was going to bother to actually READ it !! LOL” - Eric B.