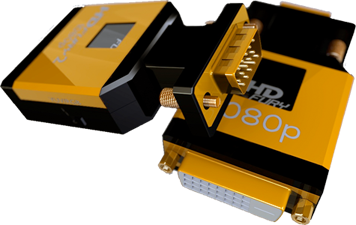 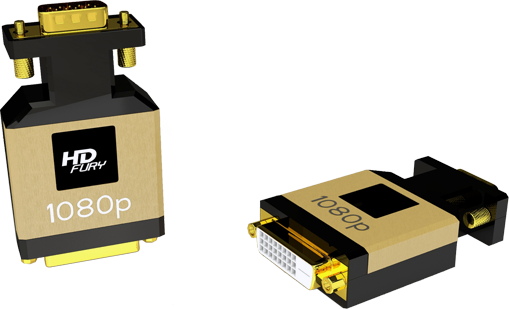 A kind of an introduction : GETTING STARTED WITH HDFURY

1) Is HDfury compatible with my Display ? (How to make sure that your display is compatible)

If you are not sure whether or not HDfury is compatible with your PC Monitor, CRT Projector, or Plasma/LCD HDTVs we recommend you to perform the following test:

Plasma and LCD HDTVs are oftenly listed as “Supporting 720p/1080i” or “720p/1080i compatible”.
This does not mean that these displays are TECHNICALLY ABLE to handle 1280×720 or 1920×1080 resolution !
In fact most of them are 1024×768 max resolution
Basically those displays will receive a higher resolution signal through their components or VGA input and DOWNSCALE it to 1024×768 (the best supported resolution)
The well designed (often more expensive) displays will DOWNSCALE 1280×720 or 1920×1080 through both VGA and/or component input. (Ex: Panasonic TH-42PH9WK)
However it has been reported that some do not DOWNSCALE signals sent through the VGA input but only through component !
Therefore it is best to use the above test to make sure that the HDfury will work with your display device !

2) Is HDfury compatible with my Source ?

HDfury is FULLY compatible with all recent source devices such as the PS3, X360 Elite, HD-DVD players, Blu-Ray players, HDMI graphics card and the latest set-top-boxes (STB) and DVD players with HDMI outputs. A power supply will be required for many sources. We recommend that a power supply be used for all sources other than the PS3 and Xbox360.

Some older STB and DVD players with HDMI output may have potential problems due to the following issues:

- HDCP Handshake issue (HDCP not correctly implemented by the Source Manufacturer)
Some older STB and DVD players were released before the HDCP specs was finalized, and therefore may suffer from the HDCP handshake bug.
The industry initially announced only one HDCP handshake at power up while on the actual devices and chipsets produced, this HDCP handshake has to be renewed continuously every 2 seconds.
This issue is greatly explained by HDMI.org themselves here : http://www.hdmi.org/training/player01.html (Click on Common Installation Issues and the 2 links above)
As explained by HDMI.org thes source devices will never be able to display any signal on even the newest HDMI displays. These source devices require a firmware upgrade.

If you are experiencing problems getting a HDMI signal displayed correctly from a Toshiba HD-DVD player and you call Toshiba, the first thing they will tell you is to “Please remove any HDMI to DVI adapters in your signal path!”
We recommend using a HDMI > DVI-D cable of great quality without any HDMI to DVI adapters.
You should ALWAYS use the supplied breakout (extender) cable that shipped with your HDfury: No warranty on the quality can be given when using another breakout cable, especially cables that are longer.

Once you hooked up HDfury to your display and ran a DVI-D>HDMI cable to your source the first thing you need to check is the Blue led status: Is the Blue LED ON ?

The led indicates that HDfury is receiving enough power from the DVI/HDMI source and ensures that device is now operating and outputting an RGB signal.
If LED is OFF, the HDfury is not working, and therefore no RGB signal is going out to your display.
Reasons could be one of the following:

- Your HDMI source is not set to output through HDMI > (ex: on PS3 you must activate HDMI from the display settings)
- The DVI or HDMI cable is using thin gauge copper wires and its length exceeds 5 meters
- The DVI or HDMI source is unable to deliver the 0.5A maximum current over its HDMI or DVI pin #14. We recommend that a power supply be used for all sources other than the PS3 and Xbox360.

SOLUTION: We recommend you use our USB to +5v cable or any +5v power supply compliant to the following:

- Provides REGULATED (+/- 5%) 5VDC power with 0.5A max DC current,
- Delivers the power through a small 0.65mm diameter center pin / 2.6mm outer diameter DC plug (like the one often used in cellular phone AC adaptors),
- Provides the correct polarity with ‘plus’ on the OUTER part of the plug and ‘minus’ (ground) on the small center pin of the DC jack.

Warning: Trying to use an AC/DC adaptor that doesn’t follow all these requirements may destroy your HDFury !

5) Some notes on when you first connect the HDfury !

When you connect the HDfury for the first time you may see the screen shifted to the left > This is normal.
Simply adjust your display’s settings to shift the image back. This needs to only be done once.
On some European CRT displays you will not be able to shift back far enough because of the US/Euro HD ‘porch’ differences.
If this affects you, switch your source to 60Hz to solve the problem. You can setup a new memory and it won’t disturb any of your original settings.
As the HDfury comes with his own EDID, you will always have the H position to adjust.
For example, you can connect HDfury to your PC VGA screen, and you will see that the first time the picture is shifted to the left.
You can then adjust this setting on your PC display, and it will be perfect. If you connect your computer back to the PC VGA screen, the image will centered as before!
Your screen / display has memory functions to store your settings depending on the source. There is no other settings to adjust.